No Soldier Left Behind

The first Veterans Treatment Calendar in New England opened its doors for referrals in the District Court in April 2011. The designated calendar, which was initially part of a pilot program funded through a SAMHSA (Federal Department of Substance Abuse and Mental Health Services) grant, was designed to direct veterans, diagnosed with trauma related disorders, into a court program which integrates support and treatment plans with the judicial process. It is intended to divert the offenders away from incarceration while providing appropriate rehabilitative alternatives. For more information on programs related to the SAMSHA grant that are on the District Court Pretrial Services webpage, please click here.

Recent statistics indicate close to 1.7 million Americans have served in Iraq or Afghanistan. While a significant number, nationwide this is less than one-half of 1% of our national population. Rhode Island has given more than its fair share to those statistics. The call back of our own National Guard is the 2nd highest in the entire United States. As of September 30, 2010, the number of veterans living in Rhode Island who served in the Gulf Wars is three (3) times the national per capita average.

Most of these veterans, amazingly, return home and successfully reintegrate into the fabric of society. There is, however, and increasing number of individuals who are not able to successfully do so. Studies now indicate that one (1) in three (3) returning will exhibit some symptoms of mental illness. Of course, not all of them will wind up in the criminal justice system.

As a problem-solving court, the mission of the Veterans Treatment Calendar is to successfully rehabilitate participants, on a case-by-case basis, by providing the tools and skills necessary to address veterans’ unique challenges to reintegrate successfully into society and to maintain a productive and law-abiding lifestyle within the community.

Goals of the Veterans Treatment Calendar: 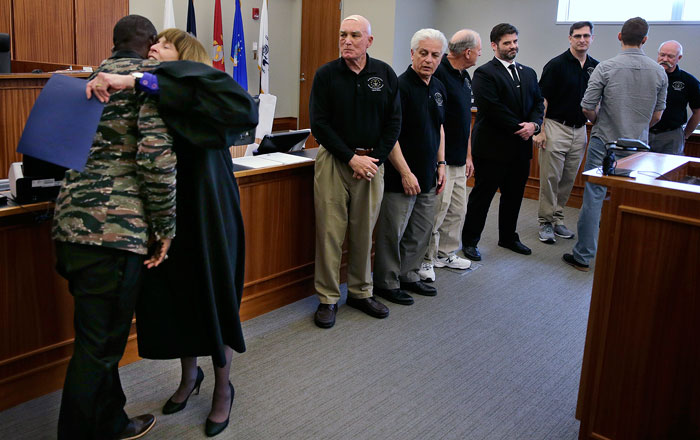