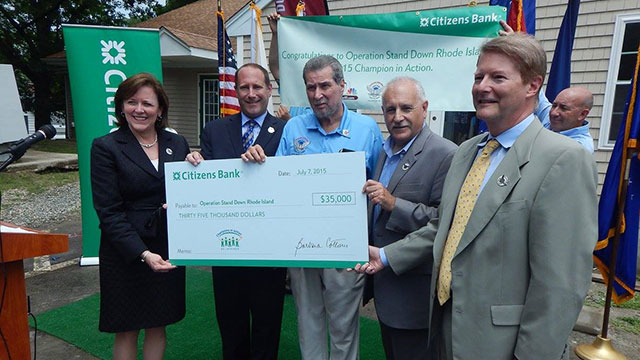 It started as a yearly weekend encampment to help local veterans. Now two decades later, Operation Stand Down has more than 60 units of housing statewide for veterans in need. “We had our first interview with Operation Stand Down. We had our second interview, next thing I know, can you move today?” said Jessica Conti of Westerly Conti’s husband is one of those veterans. Operation Stand Down helped their family go from a shelter to housing in Westerly. “It’s good to have a home. This is home,” Conti said. While Operation Stand Down provides some veterans with housing, it helps other stay in their own homes. “Paying back rent, paying their rent going forward, while they transition into employment and training,” said Erik Wallin, executive director of Operation Stand Down Rhode Island. The organization holds veterans job fairs and works with the Network RI Career Centers to reach out to veterans looking for work — like David Newcombe. “Sometimes the rent wouldn’t get paid,” Newcombe said. After he retired, he found it tough to make ends meet. Operation Stand Down helped connect him with Avellino Security, a company that employs only veterans. Newcombe is now director of operations. “It’s expanding my mind. It’s helping me to get more out of life,” Newcombe said. Even down to the most basic needs like food on the table, Operation Stand Down is a hand up, not a handout. While Operation Stand Down has grown tremendously over the years, the growth is not over. New construction is in full swing at their Johnston location. The $35,000 grant from their Champions in Action award will go toward a new service center, allowing case managers to work with clients in a more conducive, private setting. “These are folks that went off, fought, put on a uniform to protect and maintain the American dream,” Wallin said. Operation Stand Down, moving forward to make sure no veteran is left behind.